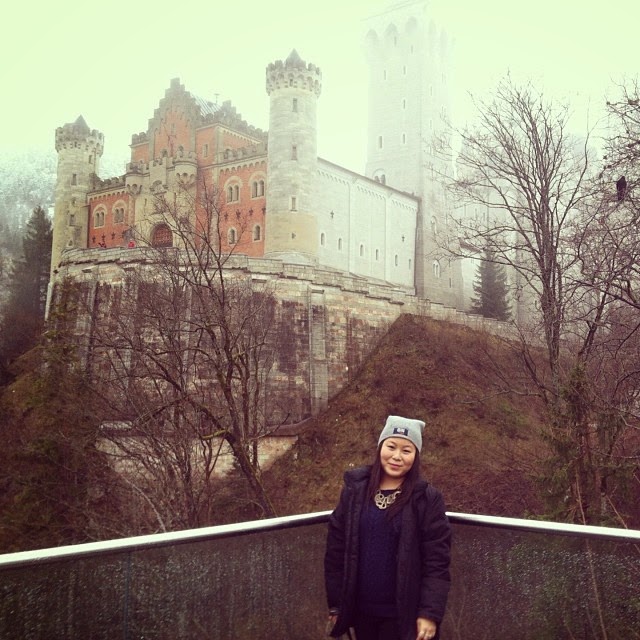 My time at Aarhus came to an end on Tuesday 7th morning after a painful 12hr exam the day before and a night out to bid farewell to my home for the last 4 months!
After finishing my exam around 6pm, I did some last minute packing and cleaning and then met Pia and Steph at Kurts Mor (probably the most seediest bar in Aarhus haha) for some beers. We made it a night and went to Bodegean and a few other bars. Had the liquorice shots for the last time at Bodegean – I have a love hate relationship with them but I really am going to miss them haha
Although I officially left Aarhus, it hadn’t hit me at that point. I was ready to enjoy my last 12 days of fun in Europe and not yet ready to be home. It now hits home being back in Sydney. I love being back in the warmth and generally better weather and seeing family and friends but I miss Aarhus and all my friends and experiences I made there.
Some highlights of my European Winter adventures are below:
München
Munich blends old and new and is the capital of the state Bavaria. It was lovely walking through Marienplatz, the main square in Munich and the Rathaus with the glockenspiel. The first morning was spent at Cafe Glockenspiel for a delicious breakfast platter and amazing view of Marienplatz. I went up to St Peter’s Church for the view of Munich from above. München Residenz and Treasury which was pretty stunning inside and Frauenkirche was an interesting church. Walked around Hofgarten and Englisch garten which is a massive garden in the middle of the city.
It was great catching up with Niko at Hofbraükeller, a typical Munich beer hall over a Wiener schnitzel and beer. Also caught up with Franziska for drinks at Die Bank then Lola which was really lovely.
The next morning caught the train and headed to Olympiazentrum and walked around the Olympic stadium area (where they had the 1972 summer Olympics) and then walked up a hill to see a nice view of the park and Munich. BMW world was nearby and check out some of new models of cars. In the afternoon, headed back to the city centre and went to Cafe Frilehhut Schmalznudeln near Viktualienmarkt. I had the Munich specialty, schmalznudel which is a fried light doughnut that is the shape of a square and it was delicious!
Füssen
From Munich, I took a train to Füssen to see the Neuschwanstein Castle (also known as the Disney Castle). When I was walking up to the castle area, it was lightly snowing which made it feel magical and special. The tour of the castle was well done and the interior of the castle was absolutely stunning. The castle never actually got completed but we could see the completed rooms which was worthwhile.
St Gallen

I went to St Gallen primarily to visit Ramon and Adina. St Gallen is a small Swiss town with churches, squares and old buildings. I arrived in the evening, we went to PAUL club.

The next day was spent walking around the Old Town, walking up the hill to check out Drei Weihern (the three lakes) and to see the whole view of St Gallen. I tried the famous “St Gallen bratwurst” which is a white sausage and apparently the best on in Switzerland! Ramon and I took the train to Lake Konstanz – the largest lake bordering Switzerland, Austria and Germany near the alps. It was very serene around the area and it would be great to come back in the summer to hang out and go swimming there!

In the evening, we went over to Adina’s place for raclette which is a type of cheese and eaten when it is melted – it is so delicious! We had fun pre drinking and headed out to PAUL club again.

Thanks to Ramon for letting me stay and showing me around – it was short but sweet!

Zurich
In Zurich, I couchsurfed with Maurus who was willing to show me around the city. We walked around town and walked along Lake Zurich. Went to Les Halle, a col cafe/bar with Maurus and his housemate Phil and we to Frau Gerolds Barten for cheese fondue and more drinks. It had a sick setting and was super cosy. After, we went to Langstrasse which is a street filled with bars which was fun.
Luzern
When you see postcards of Switzerland, Lucerne is a city that is most definitely showcased. I was there for 1.5 days and it was more than enough to see this small yet picturesque town.
Went to the famous Lion Monument, walked across Chapel Bridge many times and walked through the beautiful old town. Walked around the lake and enjoyed the mountain views – unfortunately it was quite drizzly! Went to the Rosengarten Gallery where Picasso and Klee’s work as well as Monet’s work being displayed. It was only spread over 3 small levels with different rooms explaining cubism, Impressionism etc so it was not overwhelming but very insightful.

Mount Pilatus – it cost 54.40 francs to go all the way up by cable car and although it was fairly expensive, it was definitely worth it. The view up the mountain was stunning and it was snowing a lot which made it even more beautiful!

I couchsurfed at Sebastian’s place just for one night and we had cheese fondue together for dinner which was nice. We went to Hotel Monopol and got some cocktails whilst enjoying the view of Luzern.
Basel
Basel is a beautiful medieval city located on the border of France and Germany.
I stayed at Basel Back Pack’s hostel and it is highly recommended! They give you a mobility card for free to use all modes of transport in Basel which is really convenient!
The old town is beautiful and the Rathaus (government house) is amazing to look at. Went up to Münster und Pfalz (cathedral) and it is a red sandstone building with colourful rooftop tiles. From here, you could get a fantastic view of Basel and the River Rhine.
I met Marie, a Dane who was staying in Basel for a few weeks. She wanted to show me countryside Basel so we caught the train to Allschwill which is only 10-15 minutes outside the centre. It is a whole new world there and it was nice to get out to the nature.
We caught the tram to Kleinhüningen and went to Dreiländereck (three countries point) where Switzerland, Germany and France meet and it was very cool to see that. There is a huge port there so there were massive containers, trucks and trams there.
Went for a meal at at Lowenzorn, a traditional, historic restaurant and had some veal sausages with onions and pomme frites which was delicious. The interior of the restaurant had lots of character. Went to Bar Rouge which is a fancy cocktail bar located 105m above and is Basel’s highest building. The views and drinks were equally as good!
Paris
Second time round in Paris and there is a never ending list to do here. In my short time here before flying back home, went up the Eiffel Tower, went to the top of the Arc De Triomphe, strolled down Champs de Elysse and visited Centre Pompidou which is a really cool musueum which is worth checking out. Benefits of being an “EU student” is the free entry to lot of the sights and museums.