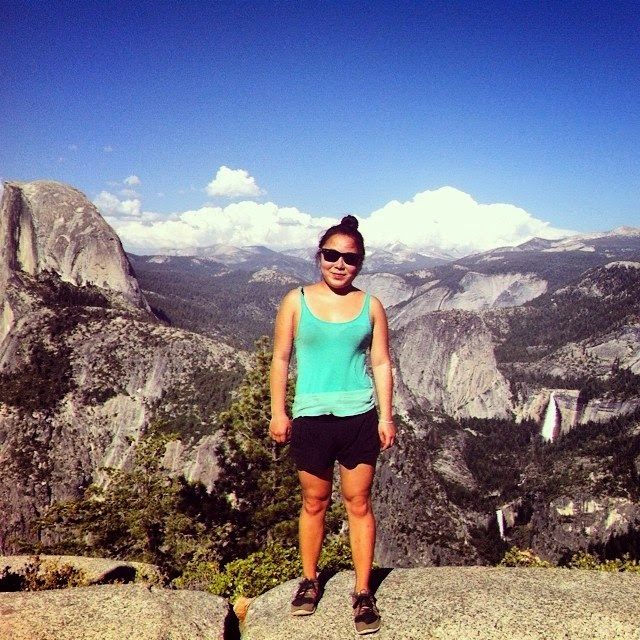 My American travels started in foggy San Francisco! Although it was summer, it was still chilly and only a mild 15 degrees – I was honestly not expecting this! Apparently the best time to come to SF is in September where it gets warmer without the fog. Nevertheless, San Francisco is a beautiful city.

I spent 6 days here and really got to experience it well. Thank you to Alejandro for taking me out and hosting me and to Cassandre for showing me around!

It was amazing to ride across the Golden Gate Bridge and ride to Sausalito. It is a small seaside suburb with huge houses, boats and yachts but it had a more relaxed feel. We caught the ferry back which was also picturesque.

I did the tour to Alcatraz Island to visit the oldest lighthouse and military and federal prison. It was interesting to see where and how the prisoners lived and to learn more about the history of the place.

I wandered through China Town and then headed up to Coit Tower in Telegraph Hill. The walk was very hilly but the views were worth it. Walked down famous Lombard Street and walked back towards Fisherman’s Wharf.

From Alejandro’s in Outer Sunset. I went for a run down to Ocean Beach then up to Sutro Baths. It used to be the world’s largest indoor swimming pool but only the remains are left now. From here, it is a nice coastal walk to Baker Beach where I got a nice, albeit foggy view of the Golden Gate Bridge. I ended back at Golden Gate Park and walked around.

A lot of people know I really dislike shopping and will avoid it as much as I can unless I need to buy something. However, I was very much keen here as the prices are better (although US$1 is down to AU$0.93) and there are better stores, brands and variety.

There are is also plenty of good food here in SF as it is very diverse. When on the West Coast of America, you have to go In N Out Burger. It is conveniently located on Fisherman’s Wharf and a must have for the small price of $3.90! Alejandro took me to House of Prime Rib which he used to frequent a lot back in his working days and I had one of the best steaks I have had in a long time!

I went to Dollie’s True Blue Diner and had two poached eggs with chorizo on the grilled chilli cheddar cornbread with pepper jelly on the side. In the Mission, went to Tacolicious for $1 tacos. Headed to North Beach to The Saloon which is the first bar in San Francisco. It was a blues jazz bar with live music which was pretty cool to enjoy a beer at. Afterwards, headed went to Golden By and shared a pizza which was fantastic!

Food trucks are everywhere in the US – we went to Off The Grid in Golden Gate Park and I had the most delicious Korean style nachos with bulgogi. We also had some Taiwanese baos and salted caramel creme brulee for dessert. After, we headed to the Academy of Sciences. On Thursday nights, they open til 10pm and have their “Nightlife” exhibit which was a very cool concept with a bar set up as well.

It was so lovely to see Cassandre who took me around her favourite places in SF including Hayes Valley, Fillmore area and had lunch at Del Fina. We also checked out The Castro and then went to Cha Cha Cha in the Mission for dinner and had tapas and sangria. After we headed to Fort Mason and went to the Budweiser party. Dillion Francis played a really great set and there was free beer provided!

Napa Valley
On my second day of arriving in the States, we organised a Napa Valley wine tour. Unfortunately I was very sick from the night before (beyond hungover) and so could only start tasting the wines from the 4th and last winery! However, it was really great to visit one of the best regions in the world and taste some Californian wine.
Yosemite National Park

On our drive to Yosemite National Park, Alejandro and I drove with a stop over in Santa Cruz where we tried one of the best clam chowders. We also stopped by his hometown of Watsonsville where we went to Real Colima 2 and had some awesome, authentic Mexican food! It was approximately 5 hours drive to our camp site at North Fork. When we arrived, we set up camp and started our fire to cook dinner.

The next morning we left early at 7am and drove approximately 1 hour to Glacier Point. The views going up were spectacular! We started our hike at the top of Glacier Point and took the Panorama and Mist trail to Yosemite Valley. The views all the way were absolutely breathtaking! It wasn’t very strenuous at all and the 12km took around 5 hours. We had a pizza lunch at Yosemite Valley and then trekked it up the Four Mile trail which was an uphill trek 2 hours and 15 minutes – this was so tough as it was the middle of the day and temperatures were 30+ degrees.