Brazil is so diverse in it’s people, landscape and culture.

We were in Rio just after the Olympics and just before the Paralympics. Surprisingly, the city was not as bustling as I thought and it was actually pretty quiet. We stayed at an airbnb in Copacabana Beach which was well located. It was close to the beach and metro and restaurants and bars were all within walking distance.

The first day was spent exploring the Lapa and Santa Teresa area. We checked out Escadaria Selaron (Selaron Steps) with it’s brightly coloured mosaic tiles. It was created by Chilean artist Jorge Selaron and there are over 2,000 tiles collected from over 60 countries around the world.

We walked up to Parque das Ruinas (Ruins Park) with an art gallery built around the ruins of a mansion.

There is a free tram from the Santa Teresa area that goes to Centro. it was nice to catch it to see the surrounding area.

We went to Boulevard Olimpico to see the mural “Etnias” by Kobra. His art is really amazing and it is worth checking out.

You can’t go to Brazil and not bring back Havaianas – they were so cheap at only 25 reais ($10) so we did a bit of shopping in Copacabana. 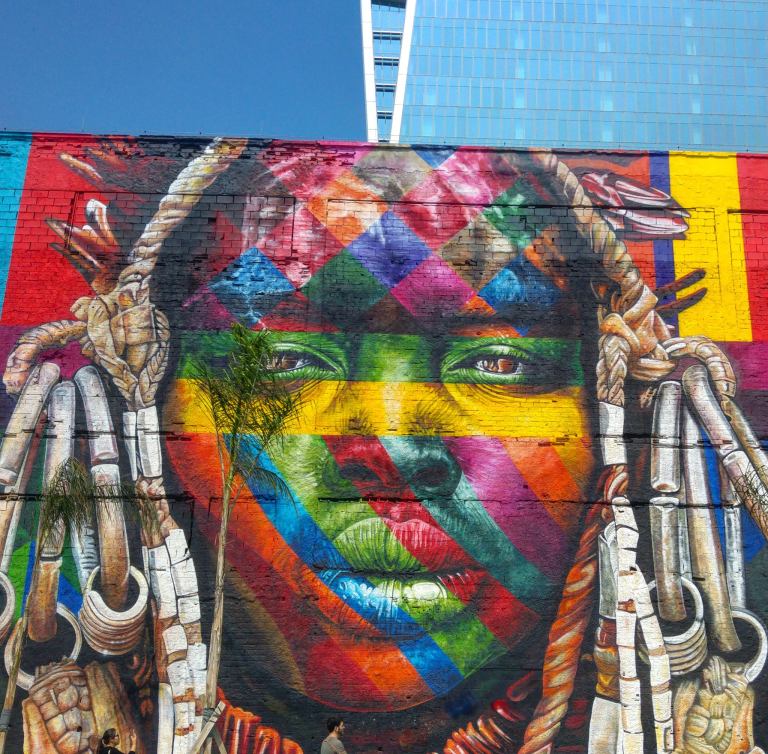 The next morning we caught the train to Flamengo to do a NTC workout. It was done outdoors at Flamengo Park with the view of Sugarloaf Mountain which was fantastic. The trainer, Manuella, knew one of the trainers from Sydney so it was nice to meet her and connect. 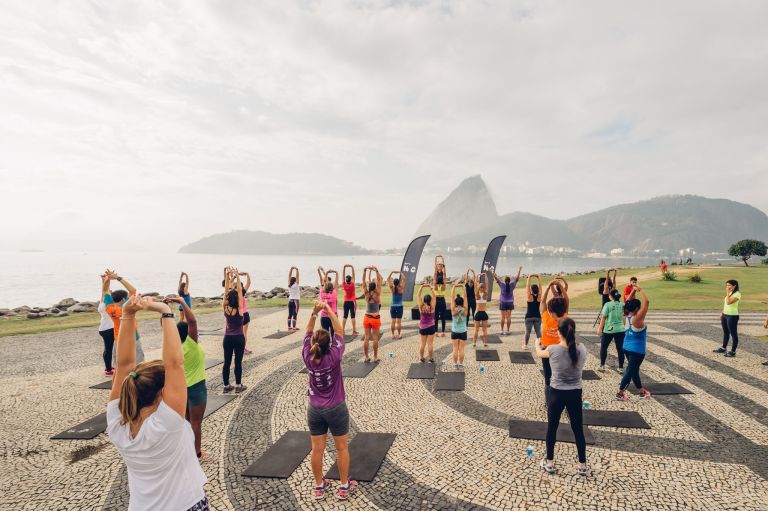 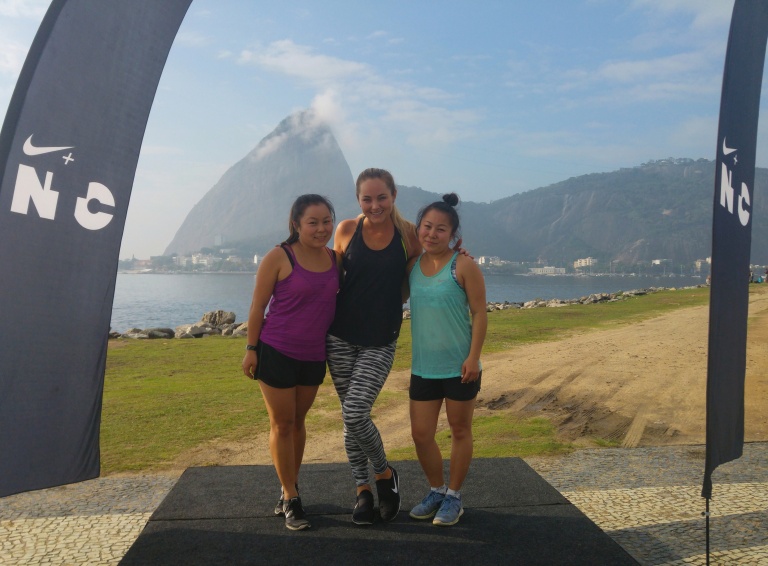 We walked to Sugarloaf Mountain (Pão de Açúcar) and caught the cable car up. The panoramic views from above are more than worth going up for.

We stopped by at Botequim Informal in Leblon for the famous feijoada. It is considered a national dish in Brazil and it is a black bean stew with pork and beef and served with kale and rice. Very delicious! 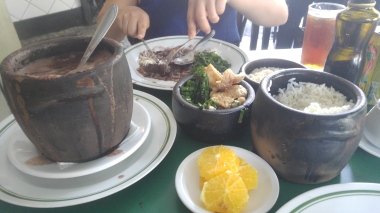 Afterwards we hung out at Ipanema and Copacabana Beach. The vibe there is like no other. There are cariocas (Rio locals) playing sports, street vendors selling typical Brazilian snacks and everyone looks like they are having so much fun!

In the evening, we had our first caipirinha (Brazil’s national drink) up at the rooftop of Porto Bay Rio Hotel and drinks at Mud Bug then headed to Lapa for more drinks. On Friday nights it is samba night and the streets were packed full of people and lined with food and drink stalls. Caipirinhas here were only 5 reals ($2!). It was a lot of fun walking around, dancing and drinking and you can’t experience this sort of night scene anywhere else in the world.

The next day, we weren’t feel flash but we caught a bus to Leblon then walked to Vidigal (a pacified favela) to start the climb up Morro Dois Irmãos (2 brothers mountain).

You catch a moto (pay the moto boys 3 reals) up towards the football stadium/field to start the hike. The hike itself takes only 45-60 minutes up and is not a hard walk but when you are hungover, it seems worse than it is. Lesson learnt!

On the way up, you can see the largest favela Rocinha. We enjoyed the views from the top where you could see all of Rio city and it was breathtaking.

That afternoon, the clouds finally started to clear so we headed to the ticket office near Copacabana Beach and got our tickets to go to Cristo Redentor. It is located in the Tijuca National Park and sits high at 710m. We bumped into a friend, Gloria up there which was lovely. The sweeping views across Rio from the top is amazing.

There is so much to do in Rio especially involving outdoor activities. I am so keen to go back to see and do things that I wasn’t able to do. The cariocas are relaxed, friendly and Rio generally has a great vibe! Although there is a huge disparity in wealth which is demonstrated by the number of favelas in the city as well as the level of petty and more serious crimes, it’s a place not to be missed.

The best thing about travelling is the people you meet along the way… we met Cristiane in Vietnam back in January and we got to catch up with her in her home city of São Paulo. She kindly picked us up from the airport and dropped by at our airbnb in Vila Madalena.

Vila Madalena is known for it’s street art as well as it’s many restaurants and bars. We only had one day and night in São Paulo which was not long enough but it was so nice to catch up with our friend.

Boco De Batman – it is famous in SP for its graffiti and street art and it was cool to stroll around checking it out.

We first went to Villa Grano to get pão de queijo (Brazilian cheese bread) and pastel de belem (Portuguese egg tarts) – so delicious! For lunch, we went to Zeni Sushi and had a feast! We hadn’t had Asian food for the whole trip so it was super satisfying. Also, it’s good to note that São Paulo has the biggest Japanese community outside of Japan.

We then went to High Line for cocktails and drinks and it had a great vibe. Our Portuguese friends joined us there then we went to get food and beers (chopp) at a Bar Filial. We had some more beers at Empanada Bar and then Cris took me to a typical Samba bar which was fun!

The next morning, we went to Galeria Dos Paes for some baked goods then walked through Oscar Ferie which is a nice street with shopping. We then headed up towards Avenue Paulista and had some lunch there. 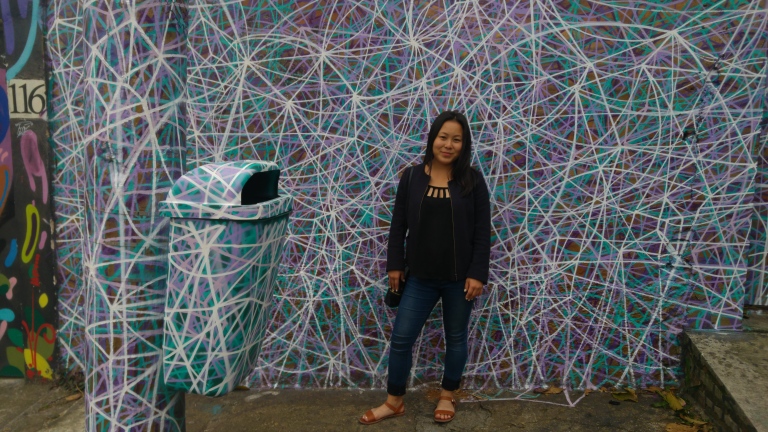 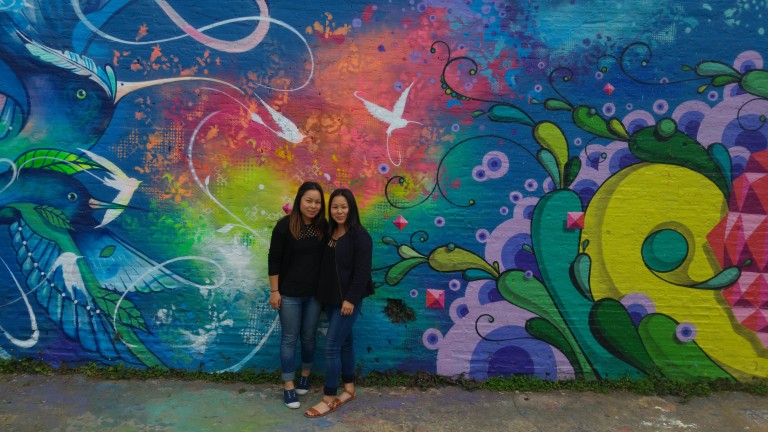 Unfortunately Liz and I both got really bad food poisoning after our day in São Paulo so we were struggling (understatement) for the next 2-3 days we were in Bonito.

We flew from São Paulo to Campo Grande and then had to get a hire car to drive the 4 hours to Bonito.

Bonito is known as the “ecotourism model” of Brazil. There are caves with lakes and amazing stalactite formations, animals and wildlife and incredibly clear rivers which are surrounded by lush forest. It is a place where many wealthy Brazilians holiday so it’s not a cheap place.

Grutas de São Miguel (São Miguel Caves) is small and if you have already seen caves elsewhere, it is not very special. However, it is still interesting to see the formation of the stalactites and there was some beautiful macaws outside. Gruta do Lago Azul (Blue Lake) where you descend 100m into the caves was beautiful as you came across an amazing blue lake in it at the bottom. Both tours cost 50 reals.

The highlight for me at Bonito was snorkelling and floating at Rio Sucuri. The waters are crystal clear and you can see many varieties of fish and wildlife. Liz even spotted an otter! The hour is super relaxing and they provide all equipment needed including wetsuits, shoes and snorkelling gear. It costs 156 reals for the tour.

I can’t wait to be back here to check out this huge country and it’s many offerings! Although there has been so much negative media coverage on Brazil recently with things like Zika, the issue of safety and violence, we never encountered any of this and felt safe in the country. The people are warm and Brazil has so many positives that outweigh the negatives so I encourage everyone to go visit!

Obrigada Brasil for a fantastic time!