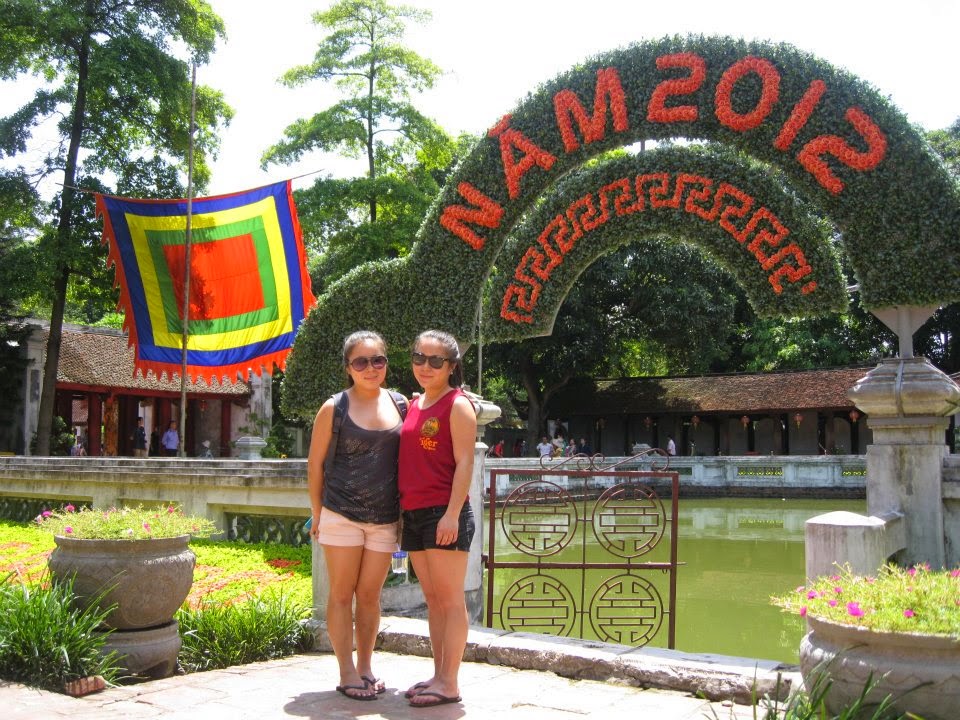 Sin Chao!
Liz and I arrived in Ho Chi Minh City (or better known as Saigon to locals and alike) with a little more than a few dramas. We flew out of Sydney in the morning and arrived at Kuala Lumpur at 7:20pm. It took us about 9hrs to reach KL due to delays and taking a different flight path. Our connecting flight was at 7:40pm… So in the 29 degree heat with extreme humidity, Liz and I had to literally run very fast to make our connecting flight. With Liz tripping over and people staring at us thinking what the hell we were doing, we made our flight with 5 minutes to spare! Winning! We arrived at Saigon airport in just less than 2 hours because of good conditions, got through customs quickly and was waiting for our baggage, but it never came. We realised it obviously did not transit properly at Kuala Lumpur so we had to fill out forms to get it back ASAP!
Saigon is hectic. Motorbikes as well as motorbike taxis (better known as xe oms) fill the street and it is buzzing pretty much all day and all night. Crossing the road – a simple task – requires concentration and your energy because of the traffic chaos. At times I would accidentally look right and think I was on the clear but quickly turn left to realise I’m looking the wrong way! The loud sounds of the city with horns beeping, the smell of the street food and the weird and wonderful sights all evoke your senses.
Our first day in Saigon was spent visiting the War Remnant’s Museum, Saigon Square, Ben Thanh markets, having a drink at the beautiful cafe called L’Usine (Liz drank one of her best ice coffees here!), eating our first pho of the trip at the famous Pho 2000, exploring Pham Ngu Lao and the surrounding streets and eating street food with locals. 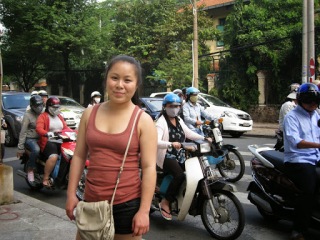 We headed for the Mekong Delta on Tuesday morning for a 2 day 1 night tour (which only cost us approximately $25). The Mekong Delta is where most of Vietnam’s rice is produced with lush paddies and villages surrounding the river. We went to Ben Tre where we went on a small boat on the canal, tasted honey straight from a beehive, had a snake wrapped around me, saw coconut candy being made and ate local fruits. We also visited the Big Buddha and had lunch in a small village.  At night, we based ourselves in Can Tho which is known as the epicentre of the Mekong Delta as it is the political, economical, cultural and transportation hub of it all. In comparison to HCMC, the traffic was extremely quiet and definitely more relaxed. We walked along the riverside and ate dinner and bought delicious rambutans for only 9,000 dong a kilo, before hitting the hay early.
It was an early start the next morning and we got a boat to the floating markets. The floating markets had a colourful array of fruits, vegetables and produce. The markets are not just for tourists unlike the ones in Thailand for example, as locals live in the boats and it is their life. It was quite amazing to see how the locals live this way and their dependence on these markets. We also saw how rice paper was made which was fascinating and the little girl working there was so fascinated by us taking photos. Cutest girl! After the bus ride back to Saigon, Liz and I found a hotel to stay the night and then walked to the Dong Khoi area to eat at Nhan Hang Ngon – a place that offers the best of Vietnamese street food in a stylish, modern restaurant setting. Had an amazing pork rib with lemongrass dish and the papaya salad, rice paper rolls and garlic chicken were all delicious!

We visited the Reunification Palace and then went to have some pho at Pho Quyhm on Pham Ngu Lao.  After we sat in Sozo, a sustainable cafe that uses staff who are disadvantaged and I had the most amazing strawberry, passion fruit, banana and honey smoothie!
Hanoi has a completely different feel and vibe to Saigon. It’s a little bit less hectic – traffic wise and people wise (in my opinion) – there a lot more tourists and backpackers and the lane ways are exquisite and interesting. Each lane is different and the vibrancy is fantastic.
We stayed at Hanoi Backpackers Hostel which is very much recommended if you’re up for some drinking and partying as well as for meeting young travelers. It was located perfectly in the old quarter as well being close to the main lake, Hoan Kiem, which made it really easy for us to explore the back streets, laneways and fantastic food that northern Vietnam has to offer. Pho was originally from north Vietnam but the south has incorporated it as well. Bun Cha is also a specialty in Hanoi and is delicious with grilled pork and vermicelli and salad. You mix it all up and it is absolute heaven!
We arrived at night and had a BBQ dinner on Ma May and we were able to cook the meat ourselves. Later, we explored the night markets then had a couple of drinks at the Hanoi Backpackers bar.
The night life is interesting in Vietnam as most bars close at 11pm or 12am due to the authorities as well as other factors such as noise restrictions. We went to the downstairs bar at Hanoi Backpackers, had a couple of drinks and when it closed at 10:30pm, everyone headed outside and we all left as a group to go to Finnegan’s, the Irish Pub. It was up a few levels up, up a tight set of stairs. After Finnegan’s closed, we went to another club for a bit then went to Phuc Tan nightclub (which apparently is a club that pretty much never closes or closes until the last person leaves) but it was a good night out.

The next day was spent exploring Hanoi. I have to admit, it wasn’t too fun walking around in the 35+ degree heat with a hangover! We got a cyclo around Hoan Kiem Lake and headed up to the Temple of Literature. We headed back to the Old Quarter and had lunch which was a place we happened to come across – a street corner selling bun cha. It originated from Hanoi and is a northern Vietnam specialty with grilled pork, spring roll, vermicelli noodles and salad with side sauce. They were cooking the grilled pork as well as the spring rolls on the spot and we devoured it! We also went to fruit shake lane and had delicious smoothies to beat the heat!

We did a 2 day, 1 night tour to Halong Bay. We had good weather for it and it was a great way to see the beautiful World Heritage site. We were able to visit caves, kayak, swim and we stayed overnight on a boat which was a great experience. A must when in Vietnam!