We started off our South American adventure in Chile. From Sydney, all flights go either directly to Santiago or with a short stopover in Auckland. The flights with LATAM were cheap at only $1,060 and there is no visa for Australians to enter Chile. However there is a reciprocity fee for Australians of $117USD when you enter Santiago International Airport so this makes it quite expensive to enter.

The city is surrounded by the mountains and is really beautiful to look at. We arrived in the middle of winter and it was actually colder than I expected! During the day it was warm, however at night, it dipped down to about 5 degrees.

We stayed at an airbnb in Bella Artes which was a good location – it is close to the main sights and close to the metro to get to other areas of Santiago. It was a bonus that we had great views across the city!

We were lucky to have a friend, Valentina who did an exchange in Australia and went to school with Liz. Even though we hadn’t seen each other in 9 years, it felt the same and it was so lovely to catch up and for her to show us around her home city.

We first headed towards Plaza De Armas and went to Domino to have hot dogs – had the Italiana with avo, tomato and mayonnaise which was good. 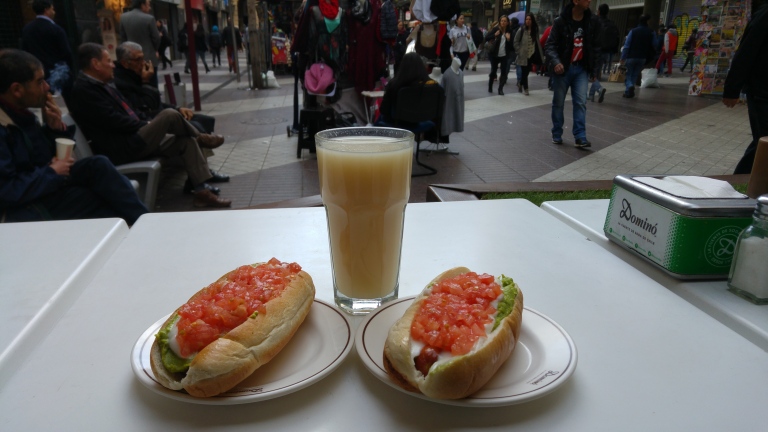 Cerro San Cristobal – we walked through Bella Vista and went up the furnicular for the panoramic view of Santiago. Enjoy the views and you can either catch the furnicular down again or walk down which we did. It is a pleasant down hill walk so worth doing to get in touch with nature.

Cerro San Lucia – another hill in Santiago that is worth going up. It had a lovely view of the city (albeit different from Cerro San Cristobal).

What better way to meet some locals than to do Nike+ Training Club (NTC) in Santiago. NTC was at Parque Arauco Shopping Centre and it was in a huge underground space below the Nike store. The workout was great and it is always nice to exercise in a foreign country with likeminded people.

Go eat at the Mercado Central. The Central Market is a massive hall with restaurants and seafood market. We ate at Donde Augusto and I had the Chilean fish which was good but the portions are massive so sharing is an option.

Check out the Chilean National Fine Arts Museum (Museo Nacional de Bella Artes) and check out the street art in Santiago especially near Bella Vista, Bella Artes and Lastarria which are all hip and trendy neighbourhoods.

Another great place to visit is “La Chascona” near Bella Vista. It is the house of Pablo Neruda (a Chilean poet who won a Nobel prize) and it is really interesting to learn about him and his life.

In the evening, we ate papa frites at Bar Bazul and had pisco sours. We also got introduced to piscolas (pisco mixed with coca cola). The Chileans love it here!

For the next night, we went to a house party in Las Condes which is a lovely area in Santiago and then headed to Ex-Fabrica for drinks and dancing.

Less than 2 hours by bus from Santiago, Valparaiso (Valpo) is perfect for a day trip or you can easily stay for a few nights. We stayed one night and although it was not enough, we still saw lots and explored the beautiful port city.

There are many different bus companies that head to Valpo so you don’t have to pre-book. We took the Turbus and it was reliable.

Valpo is known for it’s street art. In the Cerro Alegre and Cerro Concepion area, you can see the street art and graffiti on the buildings and everywhere else which makes the place extremely vibrant. We stayed in Cerro Alegre and I recommend staying around that area.

For lunch, we went to Café Turri for the beautiful view of the water and the city. I had the fish which was nice and the portions here are generous.

Go up the ascensores – Valparaiso is a very hilly city and therefore the furniculars were built for trade and transporting goods as well as people, however now there are only a few left that are functional. Nevertheless, it’s a fun way to get around the city. Costs 100 CLP but varies between ascensor so make sure you have coins on you!

Another of Paulo Neruda’s house, “La Sebastiana” is a great place to visit. It is located up in the hills of Valpo and it was different to the one in Santiago. This one is split across 5 levels and has amazing view across the city and harbour.

We caught a boat (lancha) from the port near Plaza Sotomayor. It only cost 3,000 CLP and it was relaxing and nice to be out on the water. The guide speaks Spanish but he was kind enough to also try translate for us in English. You could see the hills of Valpo and we also saw the extent of how big the cargo ships are and the importance this port city has to Chile. We also spotted some sea lions!

At night, we headed to the famous J Cruz to have chorillana. It is basically potato chips with meat, onion and egg. It was delicious! Can’t go wrong with a beer or pisco sour to accompany it!

Words cannot describe the beauty of this place. Even as we were flying from Santiago to Calama (which is the closest airport to San Pedro De Atacama), the landscapes quickly turned from snow capped mountains to red desert – it is what I envision Mars to look like. Overall, the landscapes here were so unique – there is nothing I have ever seen anywhere else in the world and you feel like you are on another planet.

San Pedro de Atacama was easily my favourite place in Chile due to its diverse nature. I could have easily spend another few days here so I recommend to come here for at least 3 days.

We arrived to Calama airport and the only way to get directly to San Pedro is to either hire a car or catch a shuttle bus/van to the town centre. On arrival, we explored the very small town and booked our tours for next 2 days.

Being a very touristy place where Internationals as well as Chileans and other South Americans come to visit all year round, it is more expensive than other parts of Chile for meals and accommodation. However, the perks of being here in low season was that prices were much lower for tours. We booked a full day tour for 30,000 CLP ($60) and another half day for 15,000 CLP ($30) – go to different tourist agencies there to get the best price. In high season, you can expect to pay double or triple those prices. Also, in the winter (low season), expect the day to be warm with average temperatures of 25 degrees but nights to hit zero degrees or below.

The first full day tour started at 7:30am and we went down Highway 23. Even driving through this highway you could see how desolate this place really is. We briefly visited Toconao town before making our first stop.

Laguna Chaxa – this salt lake is at Reserva Nacional Los Flamencos and is known to be one of the most easily accessible flamingo breeding sites. We saw pink flamingos which was amazing as I have never seen them before!

We had breakfast served to us here (included in tour price) which was some bread, biscuits and hot drinks.

It’s fascinating that there are bodies of water in the driest place on Earth.

Laguna Miniques – it is a massive volcanic complex containing a larger number of craters and lava domes. The lake itself is stunning!

Laguna Miscanti – Another beautiful lake with it’s deep blue water colour. It is said that the lava flow from an eruption of Miñiques separated Miscanti Lake from Miñiques Lake. 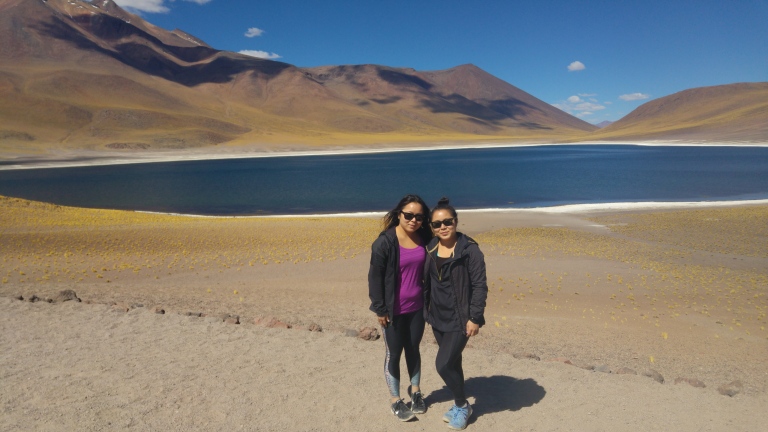 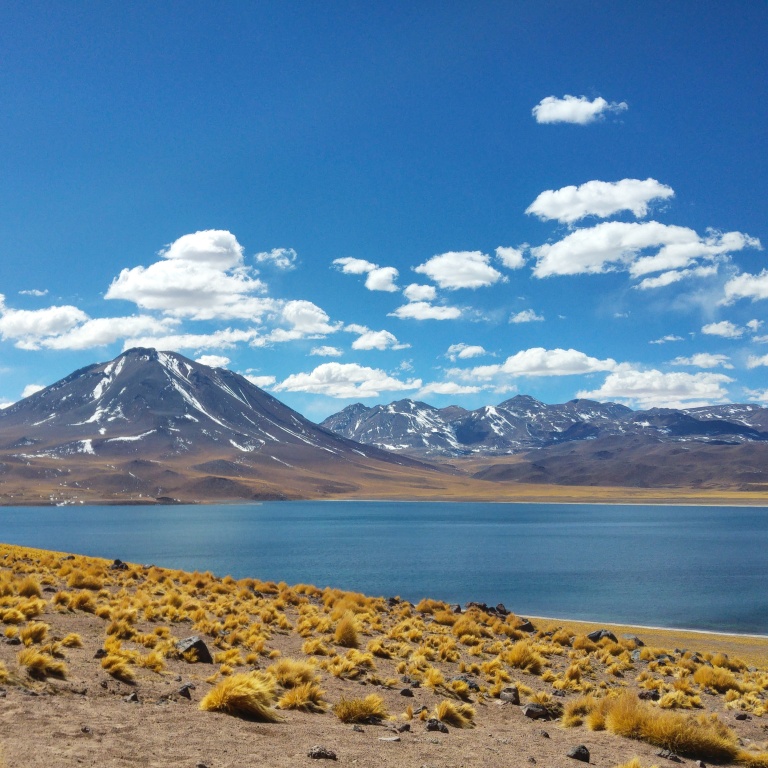 Salar De Talar – With altitudes of 3,950m and I could definitely feel it. Either that or it was because the place was simply breathtaking. The salt flats here had an amazing turquoise colour with the Andes mountain range as the back drop.

We had lunch at Socaire, a small town. We had some local food such as lentil soup for entrée, a Chilean chicken dish with rice for the mains. 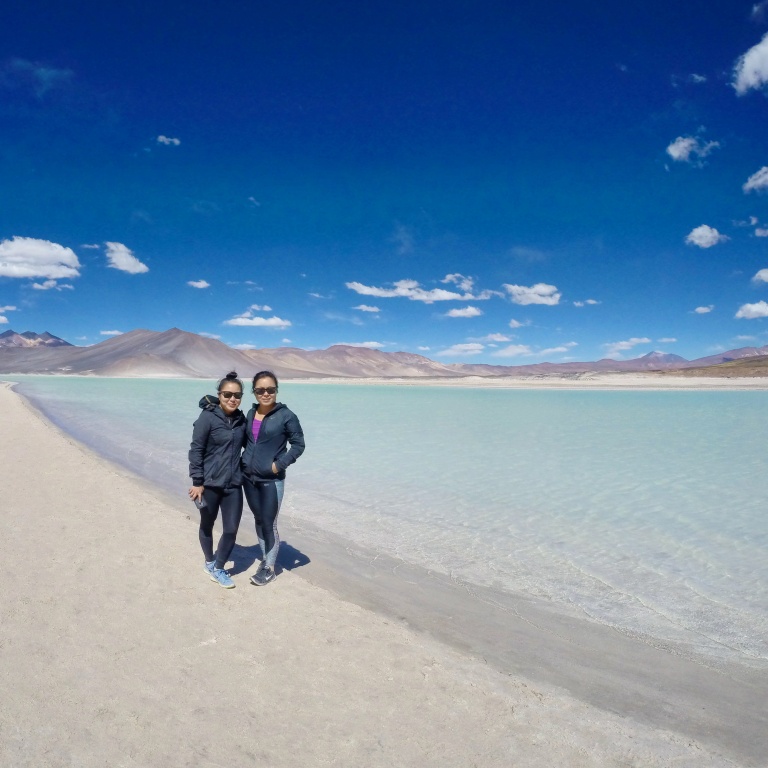 The next day was an even earlier start. We got picked up at 5:25am and headed 90km to El Tatio (the geysirs). We arrived at around 7am and it was freezing at minus 5 degrees. Entry to the geysirs was 10,000 CLP and not included in the tour price.

The geysirs were different to ones I had seen in Iceland and it was so interesting to see as they were set amongst mountains in the desert! You were allowed to swam in the hot springs, however I could not brave the cold!

We stopped by a small town called Machuca with houses the height of me and there was a cute church there too. We also made some stops as the guide showed us some animals and plants that are native to the area.

Chile is a beautiful country which is reflected in their diverse landscapes. With it’s easy access from Australia, there is no doubt I will be back!